Blog post 010: Major steps in restoring the silk and the blue components

During the past half year, enormous progress has been made on the restoration of the Keiga folding screen. Both in Leiden and in Kyoto, many hours have been dedicated to filling in the missing sections of silk and on preparing the new screen.

The centuries’ old craft of mounting folding screens consists of a string of fine techniques. It is a joy to see the craftspeople at work. Thanks to the filming and editing skills of restorer Andrew Thompson, we can show these techniques in a video. The intricate silk repair in particular is the focus of this video.

Video of filling in the missing sections of silk, courtesy of Sydney Thomson and Andrew Thompson of Conservation Studio Restorient:

The (decorative) elements of the folding screen that were originally blue, have received much attention lately. The broad damask border of the screen, the narrow brocade ribbon directly surrounding the painting, the colors of the sea and sky; these were all blue(r) once. Several of the decorative materials could not be saved and must be reproduced. This is quite common, and fortunately there are specialists in Japan who still make these.

Naoharu Usami, the restorer from Kyoto who is such an enormous support to this project, keeps frequent contact with weavers and papermakers. They provide new materials made according to old methods. Those materials that are used in the restoration are all based on the very materials that were once part of the screen.

Bringing back some blue in the sea and sky

The blue in the sections of sea and sky has unfortunately faded considerably over the course of the last two centuries. We know that these surfaces were much bluer when new. Dissection of the screen has confirmed that expectation. This can be seen in the photo below, which shows a small section of the blue sky. That section was conserved well due to the fact that it was hidden away behind the silk decorative border. It therefore did not sustain light damage, at least not to the extent  sustained by the rest of the painting. 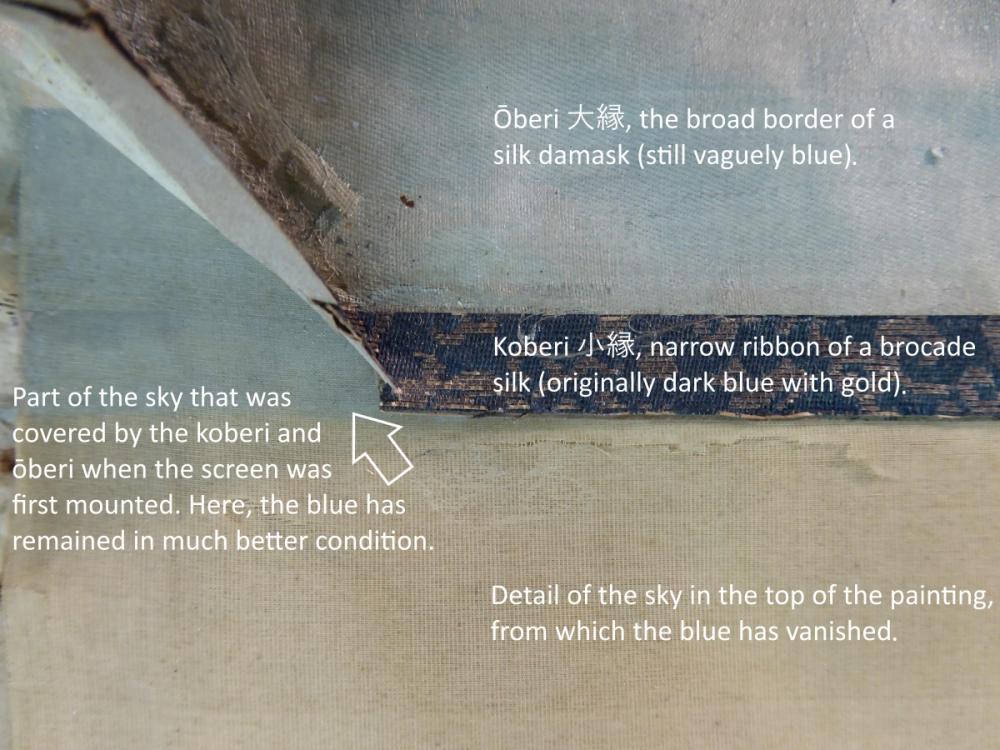 As blue as the sky once was…

The blue colour of the sea and sky will not be retouched. That would conflict with current restoration ethics, which typically uphold the core principle of reversibility. Repainting or re-dyeing of the sections of silk from which the original blue has faded, would constitute a extensive and irreversible treatment. It is of course sensible to accept that time inevitably has its impact. However, the painting on this folding screen depicts a wide panorama over sea and sky, of which we know that blue was a predominant colour. Bringing back even a little bit of blue in the painting would considerably improve the readability of this masterpiece, and appear convincing to viewers once again.

Here, a partial solution presents itself. As per usual, the silk on which the painting is painted, is supported with two layers of thin Japanese lining paper of a neutral colour. This provides enough stability to the silk to be remounted onto the newly made folding screen. Despite the two layers of lining paper on the back of the painting silk, the lined painting is still somewhat translucent. This means that the colour of the new screen behind the paintings will have an effect on the overall appearance of this piece. The outer layers of the newly made screen are now white. This would have the effect of making the painting appear whiter overall, if it were attached to the screen as is. That is why we have carried out several tests to see what the effect would be of adding a third layer of lining paper, this one blue. The benefit of this approach is that applying a third layer of lining paper is reversible. If at any moment in the future this application is no longer appreciated, then it will be possible to reverse it, without having to treat the painting itself.

In the photo below, one of those tests is shown. From top to bottom, we see the sea around the square island with Chinese warehouses (see blog post 006); a small strip of dark blue sea of which the original colour has survived due to having been covered by the silk border; then two layers of neutral (beige/white) paper; and finally the ends of some strips of dark blue paper placed underneath the lined painting. The effect is actually quite strong. The colour of the blue sea approaches the original a little bit, and becomes more convincing. After several trials and consultation with Naoharu Usami, a lining paper of a lighter shade of blue was opted for. That gave, in the eyes of all involved, an even better balance between interfering as little as possible in the object, while enhancing its readability. 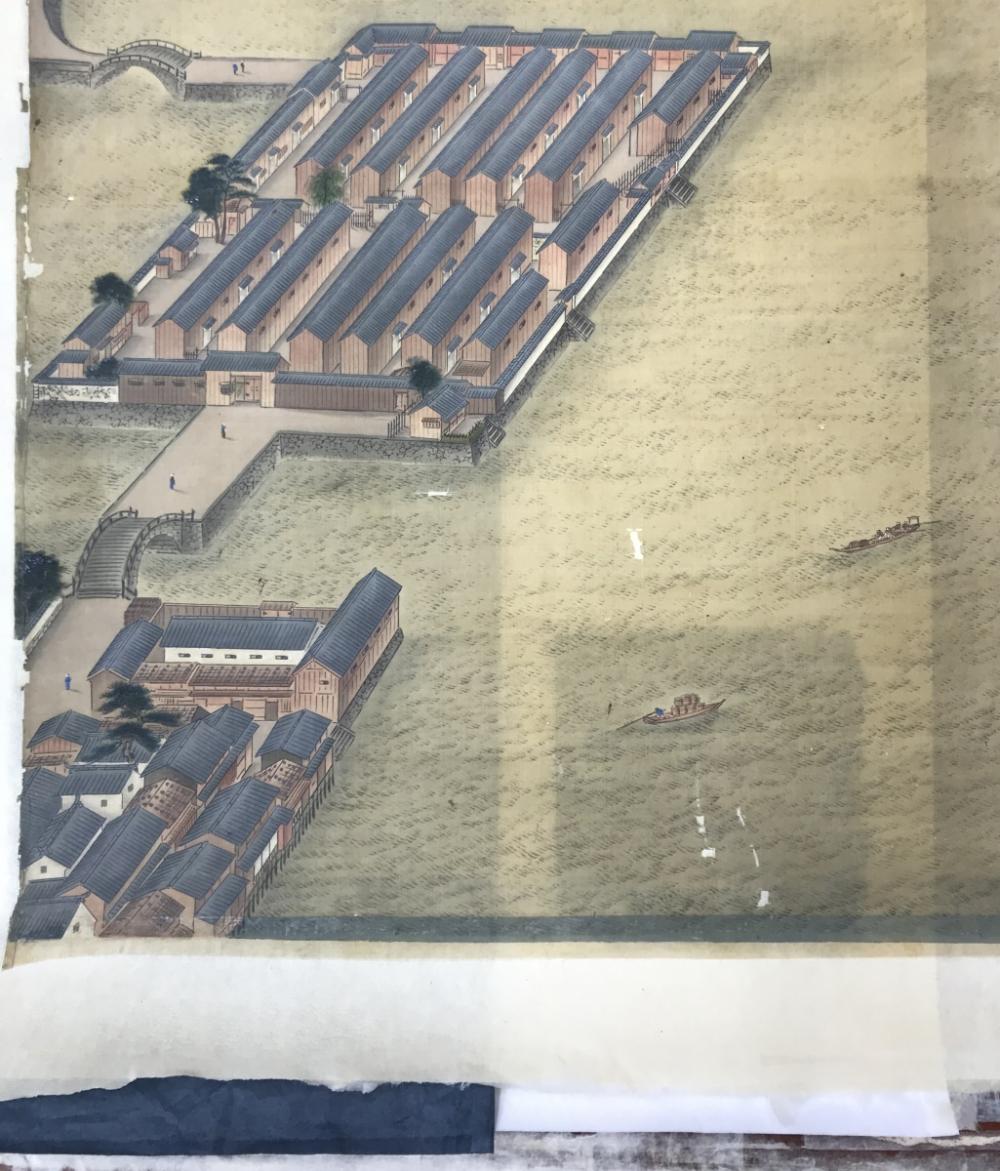 Test with a dark blue candidate for the third layer of lining paper, behind painting number 7.

It also proved possible to reconstruct the silk damask that served as the decorative border around the painting, the so-called ōberi. Dr. Yuzuruha Oyama of Tokyo National Museum has kindly studied the weave. Then, Usami-san’s studio Shūtokudō en Restorient, traced the pattern based on the segments of silk that have survived. 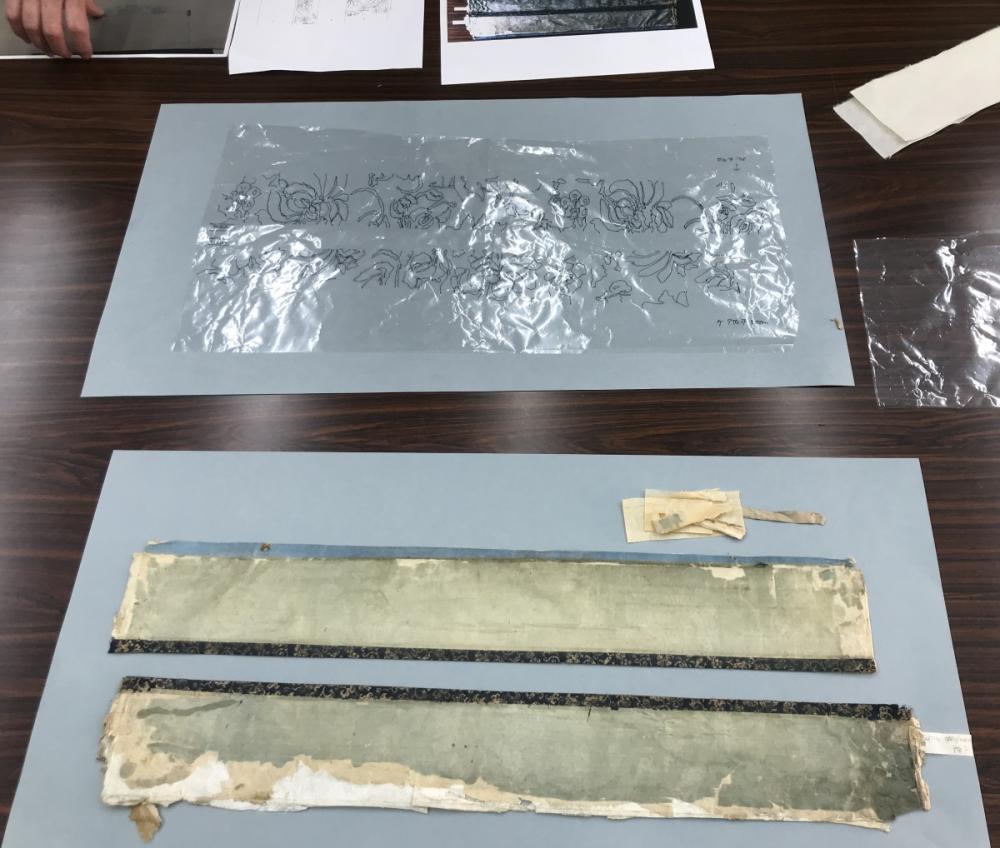 Segments of the damask border that surrounded the painting and the pattern tracings.

This pattern will once again be woven in a monochrome damask, in Kyoto. The colour will be based on a piece of the silk that was conserved best by having been placed over the edge of one of the panels, where it was subject to no or very little light exposure. The photo below shows the vast difference between the front of the silk that has been exposed to light for almost two centuries, and the reverse side of the silk that was folded over. The border will approach the original closely and will undoubtedly add to a bluer appearance of the folding screen overall. 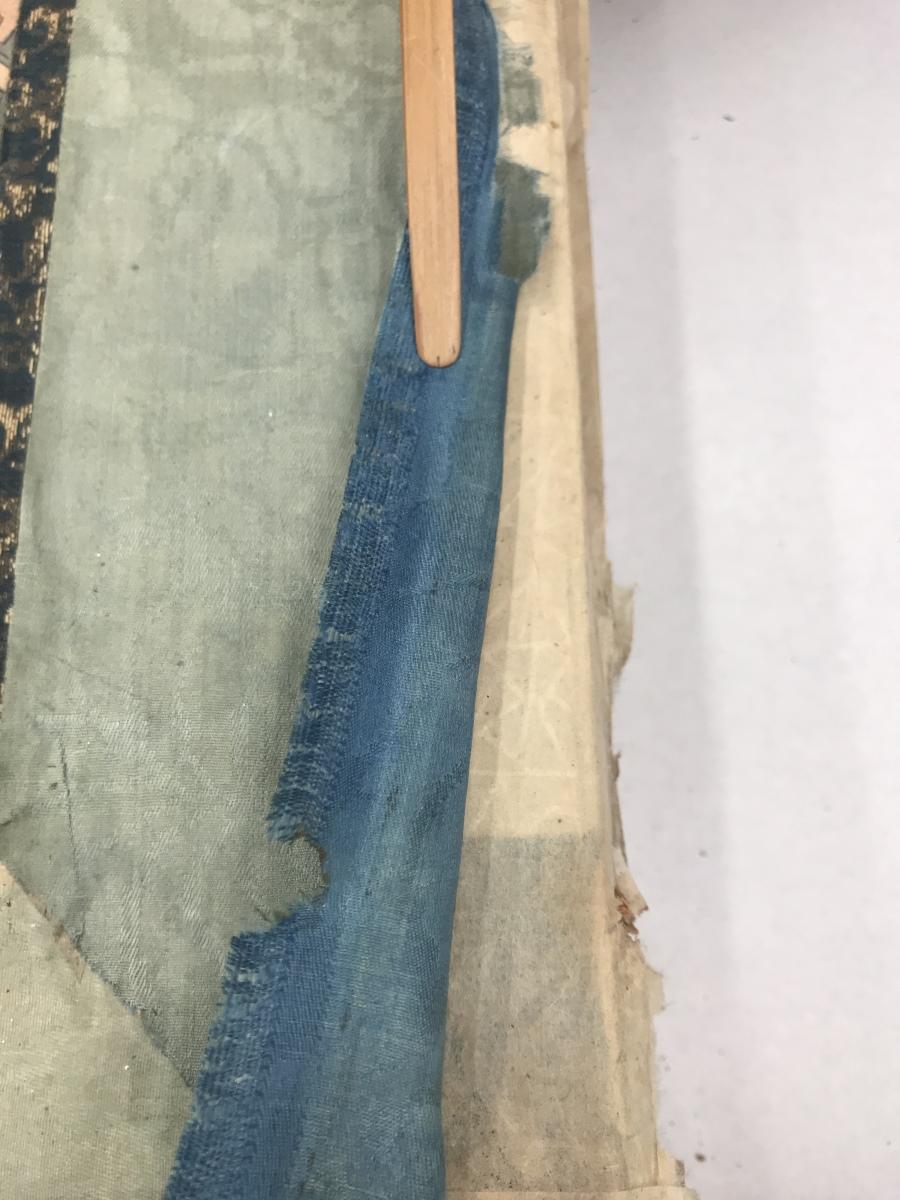 The faded front and the fresh blue colour of the reverse of the damask border (ōberi) surrounding the painting.

Meanwhile, we are considering which decorative paper will be mounted on the back of the screen. The choice for the pattern, colour scheme, and the method of (re)production will be subject of a future blog post.

Curator East Asia Daan Kok and Research Associate RCMC/Japan Davey Verhoeven write about the restoration and the results of their research of the folding screen every month. Those blog posts can be found on this overview page.

The museum is open from 10 am to 5 pm from Tuesday to Sunday.
During national school holidays we are also open on Monday